The most anticipated eclipse in American history is coming this summer. Have you made plans yet? 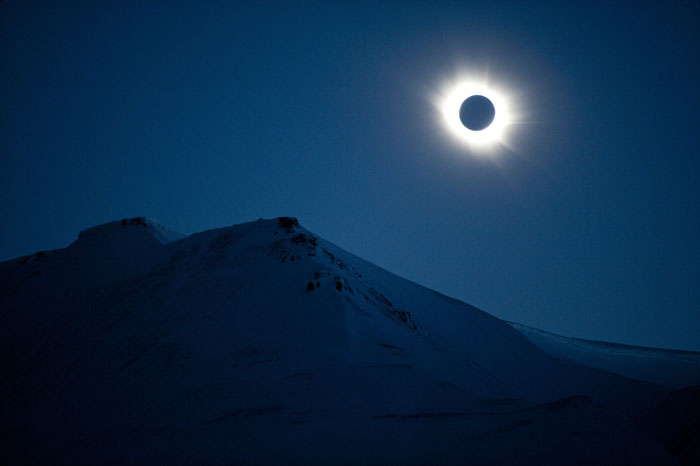 On August 21, 2017, the United States will experience a total solar eclipse. The eclipse will span across the country from coast to coast.

A solar eclipse occurs when the moon gets in the way of the sun. In extremely rare circumstances, the moon aligns perfectly with the sun, creating a total solar eclipse.

With more than 300 million people living within a day's drive away from this year's solar eclipse, it's expected to be the most viewed celestial event in history.

What's the big deal about a total solar eclipse?

To put it simply, a total solar eclipse will be the most profound natural phenomenon you'll ever experience.

There's a story of Bill Kramer, an American eclipse chaser, who made a bet with a bemused German farmer in 1999. If the total eclipse they were about to watch wasn't the most incredible experience of his life, Kramer would buy him a beer.

After the eclipse, Kramer turned to see tears streaming down the farmer's face. In his hands, he was already holding a beer to offer to Kramer instead.

And it's true. You'll feel an overwhelming feeling of awe as you witness something so powerful, so incalculably grand.

It'll be the spookiest, most primal experience you'll have ever have. No other experience comes close to the multi-sensory strangeness of a total solar eclipse. 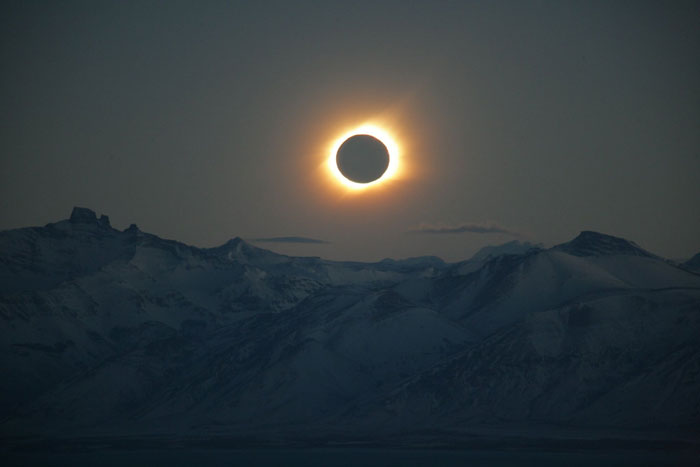 What happens during a total solar eclipse?

Imagine a bright, sunny morning, just like any other.

If you're on a mountain or an airplane, you'll see it sweeping across the landscape — a cloak of darkness enveloping the earth at more than 2000 miles per hour.

You'll shiver as you feel a sudden drop in temperature. The darkness swallows you. It becomes eerily quiet. 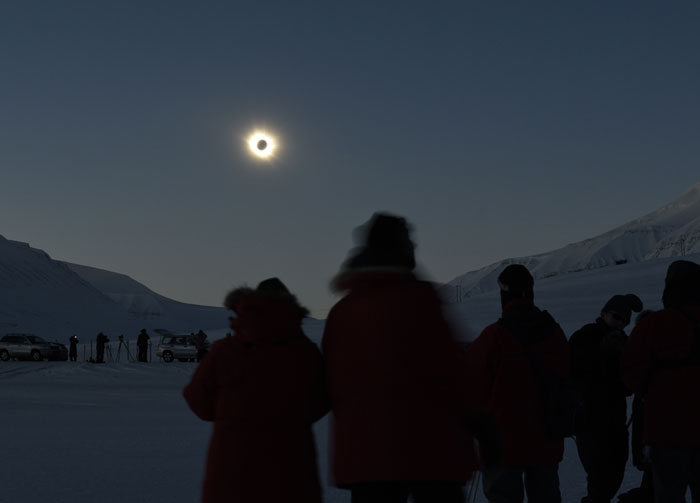 Things get weird fast. Even nature gets confused. The birds all think it's night so they stop singing. Fireflies may emerge. Cows return back to their barns. Chickens will roost.

When you look down, you'll see truly bizarre shadow effects. These are actually projected images of the eclipse itself under a tree. 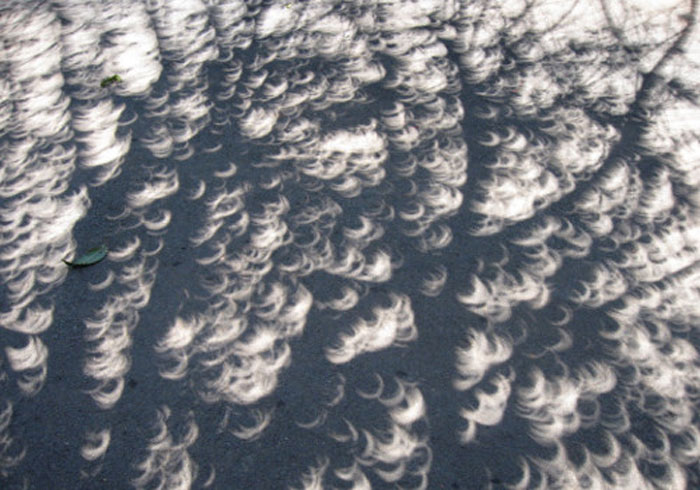 And when you look up, you'll see the most beautiful sight in the natural world: the corona. 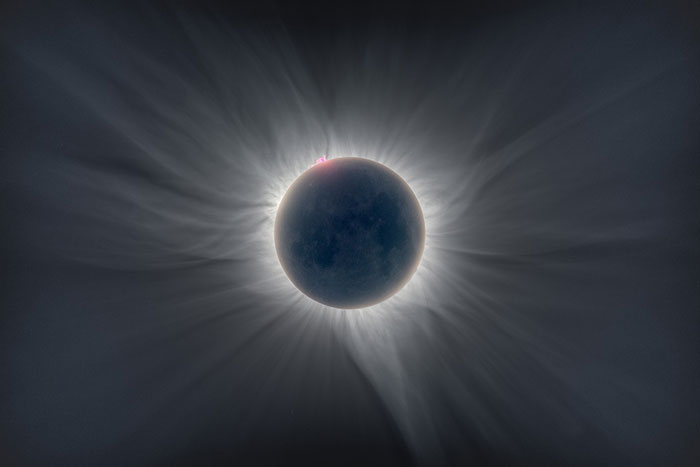 This is the sun's radiant atmosphere, glowing like a halo encircling the moon. It's been described as ten times more beautiful than watching sunrise over the Grand Canyon.

If you look around, you'll realize that the sky is now dark enough to see planets and stars, shining now even in the daytime. 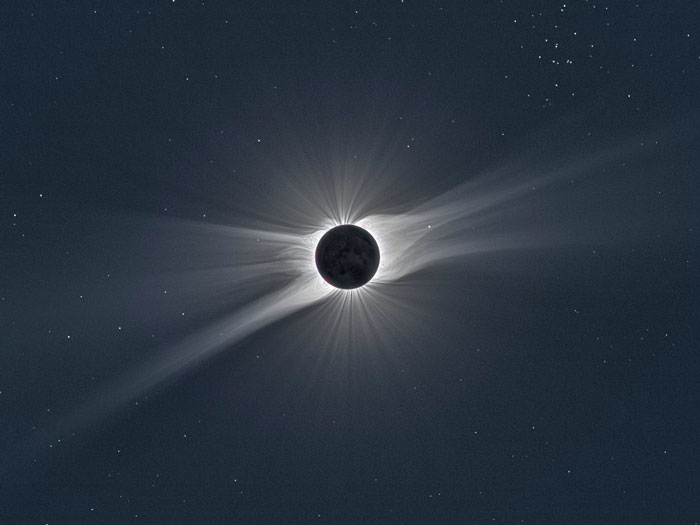 And a few minutes later, it’s over and bright once again. Just like that.

Where's the best place to see the 2017 eclipse? 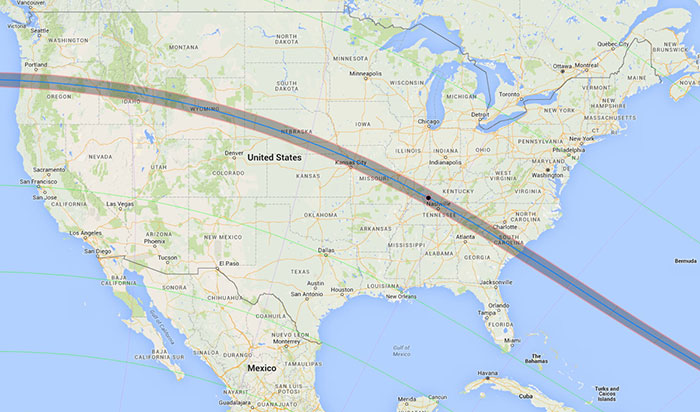 This is perhaps the most frequently asked question about the 2017 eclipse.

To see the total eclipse, you'll need to travel to the path of totality. It's a narrow band that stretches across 12 states. Only within this band will you experience a total solar eclipse.

There are some pretty cool spots along this path. The eclipse will pass over Grand Teton National Park for possibly the most dramatic scenery for the eclipse. 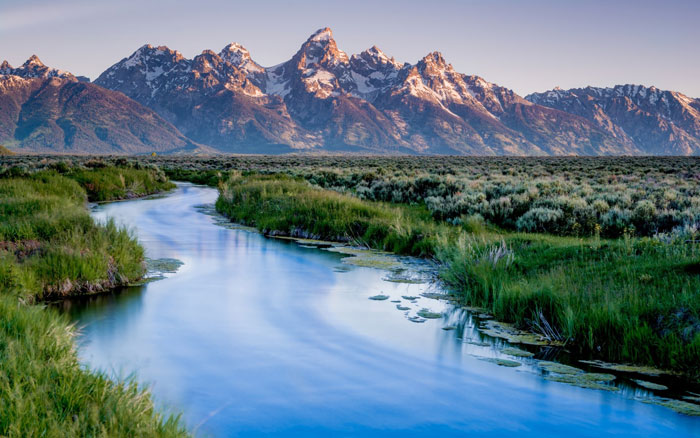 It'll then move over to Nebraska to visit Carhenge, a replica of the Stonehenge made using... cars. 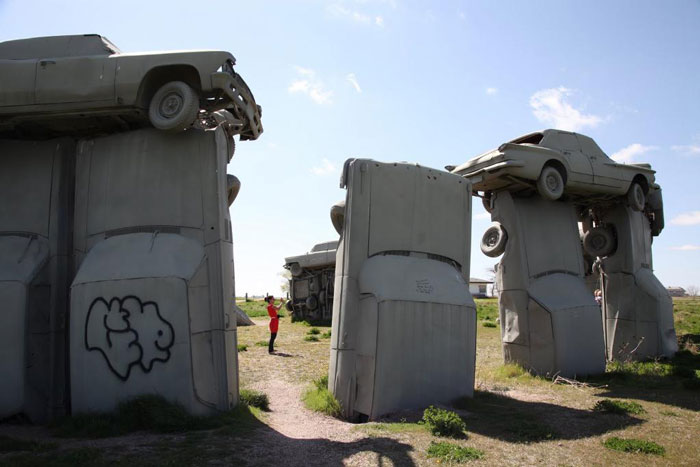 The second criterion is finding a spot with no clouds. This can be hard to predict. To put it another way, the best place is anywhere inside the path with clear skies on the magic day.

And perhaps the most important thing to consider, especially if you haven't made any bookings: millions of people are expected to travel into this narrow area to see the eclipse.

At this point, most hotel rooms inside the path of totality have been sold out for months or years. Some tourists are even reporting their reservations being canceled and rooms now going for as much as a $1,000 a night.

An option would be to stay a few hours away from the path and get an early driving start on the morning of August 21. NASA representatives predict that it may be one of the worst traffic days in national history. With that in mind, make sure you plan for extra travel time, especially on the day of the eclipse.

Here's a prediction of the traffic on August 21, 2017. You'll want to avoid driving in the red and perhaps even the orange zones. 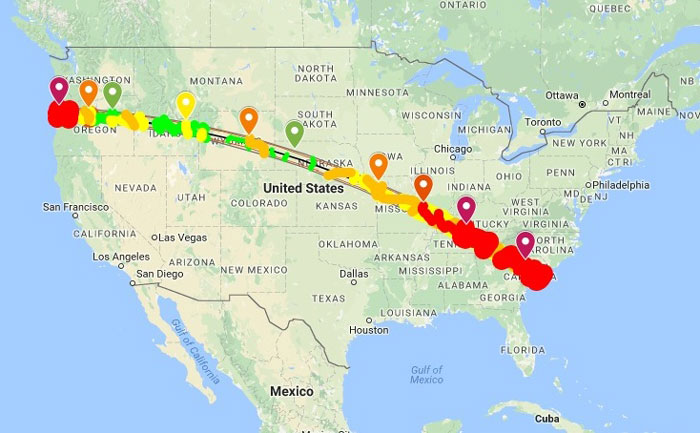 Fortunately, much of the eclipse’s 67-mile-wide path crosses over rural portions of the country. Many cities and towns are offering space for camping as part of their eclipse celebrations, which may be your best bet at this point. As an added bonus, August is a perfect time of year for camping.

Attending an organized eclipse event is an ideal way to navigate the chaos. Every state within the path of totality is celebrating with festivals and events. Atlas Obscura has put together a guide to the best options still available in each state.

Towns and cities within the path of totality are prepared for an onslaught of crowds, which you may want to avoid. How crowded?

Be prepared. And most important of all, don't forget to look skyward and enjoy the experience.

What do I need to see it?

Unless you want to look like a pirate for the rest of your life, staring directly at the sun is a bad idea. 30 seconds is all it takes to cause permanent eye damage, which often goes unnoticed because it rarely causes pain.

In fact, injuries have plagued every solar eclipse. In Europe, in 1999, 70 people lost some vision.

If you want to watch this year's eclipse, you’ll need a pair of solar eclipse glasses. 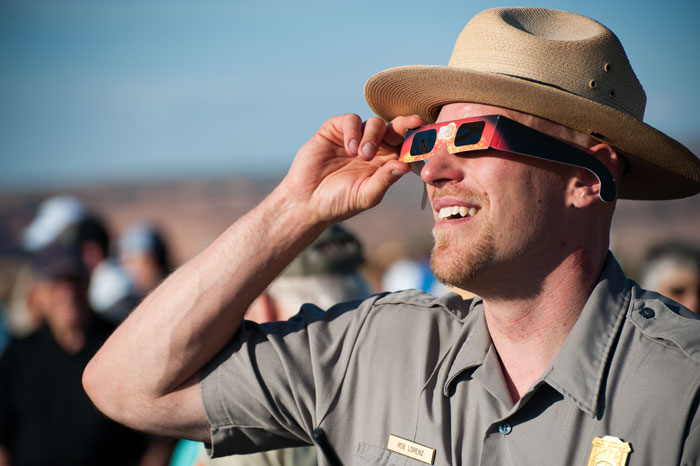 And in case you're wondering: no, your sunglasses will not do. Eclipse glasses block about 100,000 times more light than even the darkest ordinary sunglasses.

These eclipse glasses block out 99.999% of light and are necessary to enjoy the eclipse safely.

Paper glasses like the Soluna Solar Eclipse Glasses are cheap and they work well. They come in packs of 10, so if somebody tears one, you have plenty more to pass around. And if you want to snap a photo on your phone, you can cut a pair of paper eclipse glasses and tape the filter over the camera. 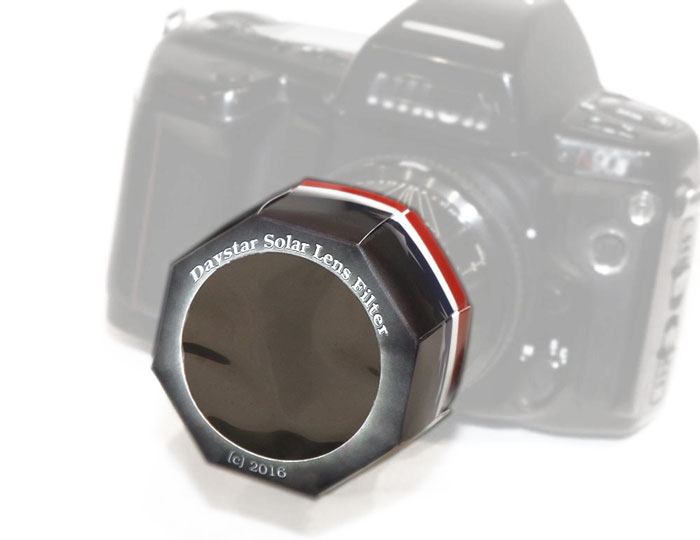 If you're looking to photograph the eclipse, you'll need a lens filter. DayStar Universal Lens Filter is an inexpensive way to outfit your camera. 50mm is the standard size, but they also sell larger filters for larger camera lenses: 70mm and 90mm.

But there's a 76% eclipse here in San Francisco?

Yes, there will be. But I can guarantee you that it will also be remarkably disappointing. 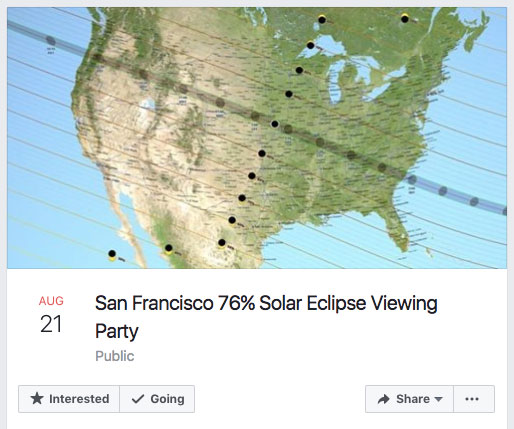 In fact, you'll be able to see the solar eclipse from anywhere in the United States.

But as long as you're not within the path of totality, you will not see a total solar eclipse. It'll just feel like... nothing happened.

Why? Even when 99% of the sun is blocked, the amount of light is still 10,000 times stronger than a full moon. So even when there’s only 1% of the sun still visible, it’s still too bright.

In fact, a 50% eclipse occurred in San Francisco in 2014. I was there and nobody noticed anything at all, even as half of the sun was covered by the moon.

Aren’t there total solar eclipses in the US all the time?

Perhaps you think that you already saw one in school when you were a kid?

You didn't. It was probably a partial solar eclipse.

The chance of seeing a total solar eclipse is extraordinary low — on average, one appears over a location every 350 years. In fact, this will be the first total eclipse visible only in the US since we declared war on Great Britain in 1776.

Trust me. You'll want to go see this one.