I set out to create the most ridiculously automated college dorm room ever.

During my freshman year at UC Berkeley, I automated my college dorm room with the most futuristic features that I could envision. This included installing an elaborate alarm system, voice control, custom lighting, motorized drapes, and even an emergency party button. Three months and several hundred dollars later, BRAD was completed!

BRAD made international media and has been watched by more than two million people. Here are a few of the publications and television networks that featured the project:

BRAD was also mentioned by Google CEO Eric Schmidt during his 2012 commencement speech at UC Berkeley.

Aftermath: I was ordered to dismantle BRAD by the residence hall authorities. Read more here. 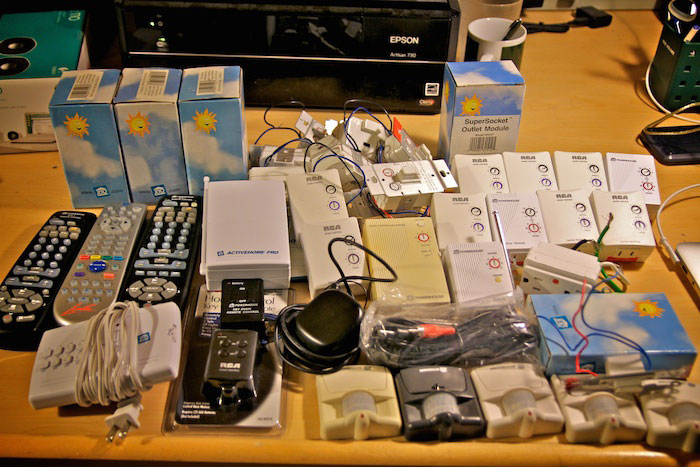 With a single button or command, all the lights in the room would switch on or off, eliminating the need to hit their switches individually. The lights can also be configured to run on a pre-defined schedule, shutting off automatically as I tuck myself into bed at midnight, or come on and greet me as I wake up at an unearthly hour in the morning.

My two roommates and I each had our own desk lamps, which was easily automated using X10 modules.

The desk lamps were using low-power CFL bulbs, which are known to cause problems with the X10 appliance module. They come with a local control feature that allows you to turn on the Appliance Module without the use of an X10 controller. Local control works by sending a tiny pulse of current out, which causes low-power lights to blink faintly. To remedy this, I had to cut a few leads on the module’s circuit board which disabled the feature entirely — and voided my warranty.

The room came with two sets of light fixtures, each on opposite facing walls. They provide lighting for most of the room, albeit rather dimly as the bunk beds obstruct them. They were controlled together by a single wall switch — the only wall switch in the whole room in fact. 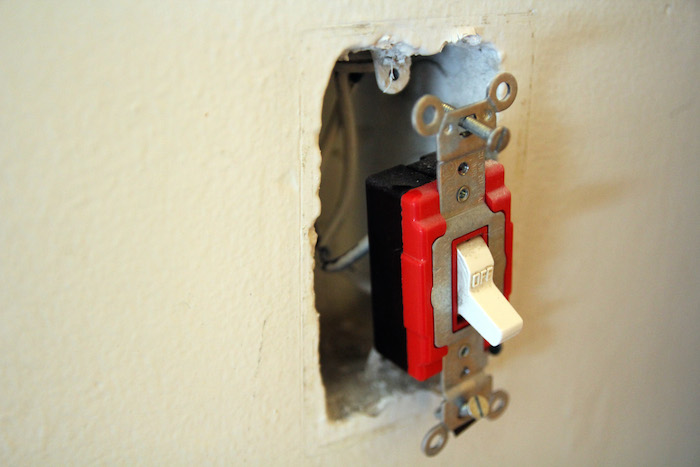 Automating the light fixtures turned out to be one of the major problems that stalled the project for a week. The room also had relatively thin walls, and even the process of opening up the light fixture cause disturbance to the neighboring room. Removing a few screws of the fixture to reach the light bulbs, I discovered the lights used a pair of compact fluorescent bulbs (Osram Sylvania CF13DD/E/841 13W). Fluorescent lights, while much more energy efficient and environmentally friendly than incandescent lamps, are problematic in X10 automation. They require a ballast which acts as a block to the X10 signals which makes it impossible to control the switch remotely. Also, the ballast is an inductive load (a coil), and controlling such a load could permanently damage the X10 modules.

The two ways to get around this was to either replace the fluorescent bulbs with an incandescent bulb setup, or control the lights at the wall switch. While it was technically possible to replace the fluorescent bulbs by rewiring (with some difficulty), the ballast was nowhere to be seen, making it impossible to change the setup entirely. The only other option was to change the wall switch with something suitable.

The wall switch was particularly dangerous and I left it as a last resort. With no access to the circuit breakers of the dorm room, the contacts and wiring inside the wall switch remains live even as I open and try to modify it. Removing two screws revealed two wires connected in series with the switch. Live current comes in through one, and when the switch is on, it passes through the other wire to the lamp. For the X10 signals to work, an additional neutral wire is needed, which allows the signals to bypass the fluorescent lights and the ballast. Once again, it proved to be impossible to control the lights even from the wall switch.

The UV light is mounted onto the wall using super strong industrial tape. It’s a simple device just turns on and off. Light up the whole room beautifully when used at night. 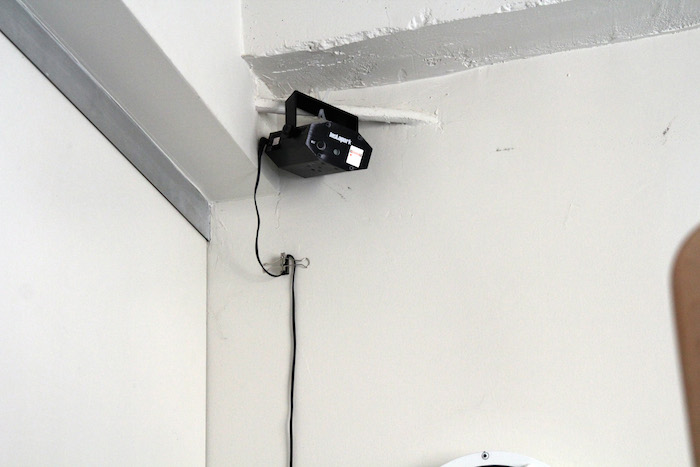 The laser light is attached to this oddly-protruding metal rod that runs across the top corner of the room. I used a zip-tie to secure it. The laser lights has a few configurable patterns and you can adjust the frequency of flashes and the movement of the lasers. It also has a feature that reacts to sound, in which it only flashes the lasers when it detects a beat loud enough. 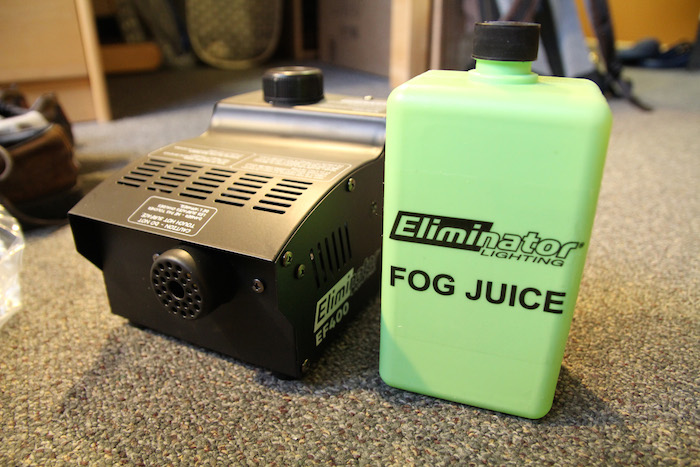 I also bought a fog machine (came with its own ‘fog juice’) to create smoke in the room. It helps to bring out the laser effects really well. But its usage has been quite limited in the dorm as fog machines have known to been to trigger smoke detectors, and it might leave a thin layer of ‘fog residue’ over all our possessions in the room. 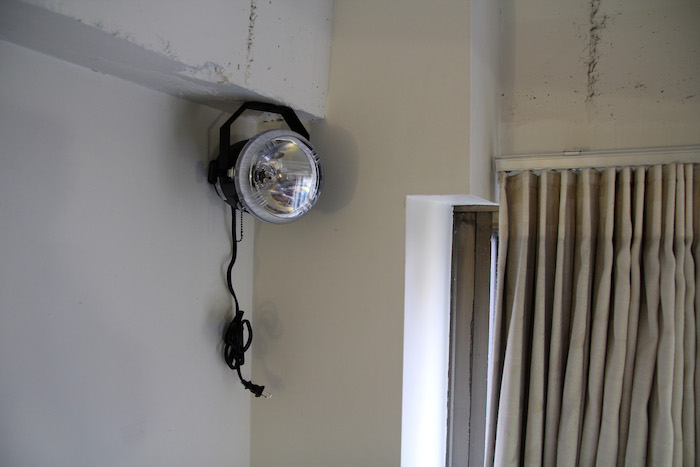 Across from the laser light, I also taped a strobe light to the ceiling in the opposite corner. It flashes way too brightly for such a small room, so normally I’ll have it pointed into the wall instead, so the light bounces off the wall and diffuses. It’s challenging to film it in operation as it flashes at a frequency that’s faster than a typical video camera’s frames per second, hence causing the video to look completely out of sync. You can adjust its flashing frequency using a knob on its back.

I bought this little button from a toy store that seemed perfect for an Emergency Party Button. Just flick open its plastic cover, hit the button and the whole room is completely transformed. I removed the circuitry that came with it, and hooked it up to a X10 remote control that I tore apart. 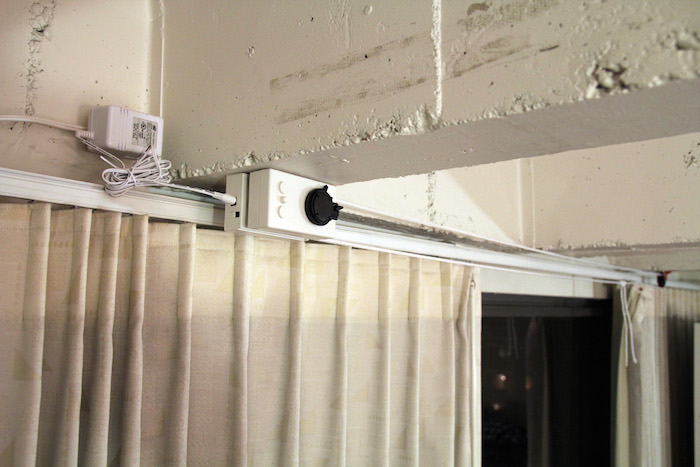 The automated curtains were one of the few mechanical components of the BRAD system, as most of the other features were purely electronics that simply switches on and off.

For a while I couldn’t figure out how to automate the curtains. The dorm came with one that was pretty much just two pieces of cloth hanging from rod. To open and close the curtains, you simply just grab it and pull it along. It was laborious and was on top of the list of things I wanted to automate.

To simplify the system, I decided that only one of the curtains need to be automated, as the other one is usually left closed to keep out glare from the sun. I designed a pulley system using a small wheel, a long cord and a two-way motor system. Everything is taped to the ceiling using the most expensive tape I could buy from the local hardware store, as I’m not allowed to drill into the concrete.

On days when a normal alarm would not get you out of your bed, the BRAD system can wake you up in the most pleasant (or unpleasant) way.

I connected the X10 controller to my MacBook Air, then I programmed a script to activate specific devices at a predefined, say, 8:00am.

A morning alarm with the BRAD system typically begins with all the lights turning on, followed by the curtains being drawn apart automatically. If that fails, I programmed a Justin Bieber song to start playing through my speakers and subwoofer for added insurance. There’s simply no way you can sleep through that without your ears bleeding.

One of the neatest feature of the room is being able to control just about everything by just saying it. It’s almost like having the room at your command, doing whatever you ask.

My MacBook Air runs Dragon Dictate, a voice recognition software, and I spent 3 hours training it to adapt my recognize my Singaporean accent. Incidentally, it uses the same voice recognition engine as Apple for their Siri technology on the iPhone. With the right commands, the software will activate a set of scripts that I programmed. These scripts will fire off commands from the X10 controllers to control the room.

For example, when I say “lights on”, my MacBook processes this and activates the ‘Lights On’ script, which tells the controller to switch on all the lamps and lighting devices.

Other modes and commands I’ve programmed include “Romantic Mode”, “Homework Mode”, and “Sleep Mode”. You can also append “Brad” in front of the commands and the system recognises it as well.

I downloaded a free open source app on my iPhone and iPad that links up to my MacBook, allowing me to control everything remotely as long as I have a data connection. The only downside is that my MacBook has to be left behind and remain switched on in the room. Considering that I bring it with me most of the time when I head to classes, I haven’t been able to use the app much despite the usefulness and convenience it brings.

Just two days after BRAD made international headlines, I was summoned to a judicial hearing by the school's residence hall authorities for committing violations of policy. 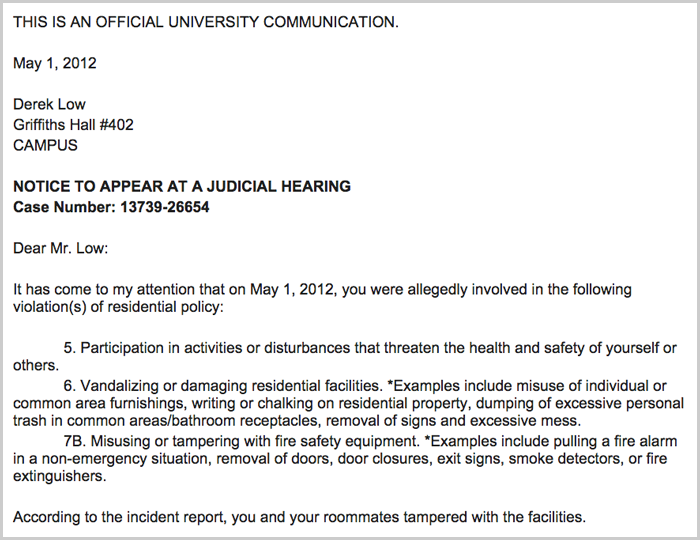 Even though I proved that I was not in direct violation of the polciies, ultimately we reached an agreement to dismantle the automation system by the end of the week. This move was widely criticized by the media. I subsequently moved out from the dorms to an off-campus apartment.